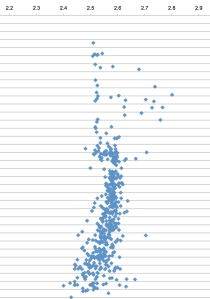 Raw data chart for M67 showing H-alpha index (N-W bands) vs. H-alhpa magnitudes. Notice the excellent turnoff point at about G0, with a red giant branch heading left, then up.

During Week 4 of my Research Experience for Teachers at Brigham Young University I began to see the results of the photometry analyses I’ve done for M67, an open star cluster in Cancer. This is the fun part: I finally get to do some detailed analyses and draw conclusions.

During Week 5, I created a hydrogen-alpha index vs. magnitude diagram for M67 to see what it would show. Dr. Hintz sketched out an idealized curve for the index, which should peak at A0 stars (more on this later). M67 has a turn-off point at about G0, according to the literature, so it should not have any remaining A0 stars and its Ha index should be less than 2.9. My own chart showed exactly what he sketched out – the upper half of the diagram was missing because there were no O-F type stars remaining, except for a few possible stragglers. I also saw a very strong red giant branch leading to the left and slightly down, then turning upward.

H-alpha index vs. magnitude with a predicted cuve for main sequence stars, peaking at 2.9 with A0 stars.

I had to think about that. In a standard color-magnitude diagram for M67, the red giant branch leads to the right and down, then turns up to its normal place in the upper right corner of the H-R Diagram before turning straight left for the Asymptotic Giant Branch (AGB) prior to the formation of planetary nebulas and white dwarfs. But in a Ha index chart such as mine, as the star runs out of hydrogen and starts to expand, it will cool, thus weakening the Ha line (less energy for the n=3 jump). Since it is getting larger it will get brighter at about the same rate as it cools, so its luminosity (magnitude) will remain about the same – it will move almost due left on the Ha index. Then it will reach a new stable temperature as He fusion kicks in. Now the Ha index will remain constant while the star continues to expand and brighten, so it will move vertically up the chart. With this analysis in mind, I drew in an idealized curve of where I expected main sequence stars to fall in the Ha index diagram. I used this as a prediction for my next steps.

The title slide of my interim report. I will post the final report later on.

At this point we all paused in our projects to create an Interim Report of our work so far, which we presented to each other on Friday, July 18. It was fun to hear more details of what the other students were doing, which included projects on acoustical signatures of musical instruments, shockwaves created by exploding balloons over the Bonneville Salt Flats, and theoretical quantum mechanics simulations that could lead to a better understanding of how quantum computers might work.

During Weeks 6 and 7, I continued to analyze the data for M67 and added more open clusters to it, making a combined hydrogen-alpha index diagram. My goal has been to compare my photometry data with previous analyses of these clusters to see how good my technique is and to calibrate my data against standards. I could see if my idealized prediction for the Ha index main sequence curve was accurate. I could also start comparing the clusters to each other to identify common and unique features.

Altogether I’ve looked at four open star clusters, including two that are young (NGC 663 and NGC 659, both in Cassiopeia, which are between 15-25 million years old) and two older clusters (NGC 752 in Andromeda, which is about 2 billion years old, and M67 in Cancer, which is about 4 billion years old). I went through all the data that Dr. Hintz gave me from observations ranging from April 1, 2012 to Jan. 27, 2014. I found one night, Jan. 25, 2014, that all four clusters were observed with the same telescope. During Week 6, I went through all the data for that night for the four clusters and did the photometry with IRAF and DAOphot just as I have outlined in my previous posts. I was much faster at it this time, even though I did make one mistake and had to redo some of the data. I then brought all the .als files into Excel and created a master spreadsheet to compare wide band hydrogen-alpha with narrow band hydrogen-alpha to get an index.

One reason for using NGC 752 is that it has been well studied by Dr. Hintz and contains a single A0 star, which is easily isolated and charted. A0 stars (similar to Vega but without the dust) are used as standards because they have the strongest Hydrogen-alpha line. The Hydrogen-alpha (Ha) line is part of the Balmer Series, where the hydrogen’s lone electron is being excited to higher energy states from the n=2 quantum level (the 2s orbital). Hydrogen-alpha is the leap between n=2 and n=3 and creates either a deep red emission line (jumping down) or an absorption line (jumping up) of 656.28 nm. The index I’m creating is for absorption, subtracting the wide-band filter results from the narrow-band results. 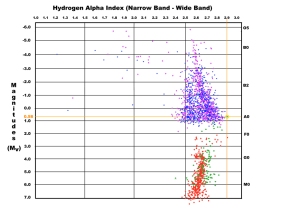 The data for all four star clusters superimposed in Photoshop and calibrated for distance and H-alpha index.

A0 stars have a strong Ha absorption line at 656.28 nm. Stars that are hotter have weaker Ha lines because they are completely ionizing the hydrogen or exciting the electron above the n=3 level (the rest of the Balmer Series, such as Hb and Hg). Stars cooler than A0 aren’t hot enough to excite the electron up to n=3, so their Ha index values are also weaker. With a single A0 star, NGC 752 can be used to calibrate the index at a peak of 2.9. My chart of NGC 752 showed a prominent star with the highest index value at about 2.35, which meant I needed to add .55 to my index values for all the clusters viewed that night.

I also needed to calibrate my comparison chart for distance. One reason for studying open clusters is that all the stars in them form at roughly the same place and time, and so we can compare them directly based on their apparent magnitudes. But since my clusters were different distances, I had to adjust for distance using the modulus formula. If you know the distance to an object and its apparent magnitude, you can calculate its absolute magnitude. I created a column in each of my spreadsheets to solve for absolute magnitude based on this formula: m – M = 5log10(d) – 5 where m = apparent magnitude, M = absolute magnitude, and d = distance in parsecs. It is based on the nature of light (you square the distance to a light source and you will have only one fourth the intensity) and the fact that the original magnitude numbers created by Hipparchus, popularized by Ptolemy, and modified by William Herschel and Norman Pogson have five magnitudes between the brightest star visible (Sirius) and the dimmest star visible to the naked eye, at magnitude six. We now know such a star is 100 times dimmer, so every five magnitude numbers are 100 times as dim.

Once the calibrations were done for each star cluster, I created a chart and imported it into a master Adobe Photoshop file as separate layers and changed the colors. I then moved the clusters in their individual layers vertically to line up with the magnitude scale as adjusted for distance and horizontally to adjust for the Ha index. I found that my prediction for the main sequence curve was fairly accurate, although there were more features to the curve than I had expected. Reviewing the literature shows the same slight curves in the line for NGC 663. I found that NGC 659 appears slightly older, by maybe 5 -10 million years, than NGC 663. NGC 752 and M67 fit into my predicted line fairly well, although NGC 752 didn’t have a very distinctive turn-off point, so it is harder to estimate its age. I also saw a large number of field stars, identified by their weaker index values.

My chart isolated an expected number of Be stars, which have emission lines in the middle of their absorption Ha lines, which causes a weaker than expected index so they are located to the upper left of the main sequence in the diagram. I found about 24 of them for NGC 663, and the literature ranges from 22-26, so not bad. One of these is our HMXB, V*V831 Cas. I also found about 22 Be stars for NGC 659.

My chart showed a red giant branch for the younger clusters that curves to the right and down toward the A0 point. I had to think about this one, too. The turn-off point for NGC 663 is the B0 star, with only a few blue straggler O stars. As the hotter B0 stars leave the main sequence, they expand and cool and their Ha index gets stronger as they no longer have the energy to completely ionize the hydrogen electron. They become more like A0 stars in this respect.

Altogether, I found out a lot of interesting things from this combined chart and am pleased that it confirms my predictions and that what I see makes sense. I can draw some conclusions that it is indeed possible to estimate the age of an open cluster by comparing it with the Ha index main sequence curve of my chart. This isn’t exactly original stuff – others have done the same, but at least I was able to replicate those results. I am becoming an actual astronomer. Of course, I lack the PhD and the math to really describe what I’m seeing here, but at least my technique is getting good results. And it will make an excellent project for students to pursue.

Next week I travel to Caltech for NITARP, and when I return, I will focus my attention on V*V831 Cas, that HMXB in NGC 663. I’ll have only two more weeks to go.

I teach courses in multimedia, 3D animation, Earth science, physics, biology, 8th grade science, chemistry, astronomy, engineering design, STEAM, and computer science in Utah. I've won numerous awards as an educator and am a frequent presenter at state and national educator conferences. I am part of the Teachers for Global Classrooms program through the U.S. Department of State and traveled to Indonesia in the summer of 2017 as an education ambassador. I learned of the Indonesian education system and taught classes in astronomy and chemistry at a high school near Banjarmasin in southern Borneo. I am passionate about STEAM education (Science, Technology, Engineering, Arts, and Mathematics); science history; photography; graphic design; 3D animation; and video production. This Spaced-Out Classroom blog is for sharing lessons and activities my students have done in astronomy. The Elements Unearthed project (http://elementsunearthed.com) will combine my interests to document the discovery, history, sources, uses, mining, refining, and hazards of the chemical elements.
View all posts by davidvblack →
This entry was posted in Uncategorized and tagged a0 star, absolute magnitude, age of open clusters, apparent magnitude, balmer series, be stars, blue stragglers, distance modulus, hydrogen alpha, m67, ngc 659, ngc 663, ngc 752, open star cluster, parsec, red giant branch, stellar evolution, turnoff point. Bookmark the permalink.