Publishing a 3D Illustration of SOFIA 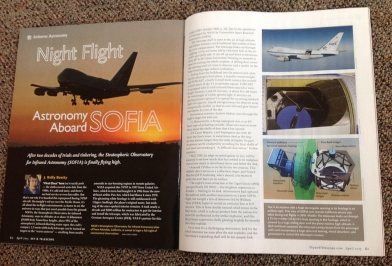 Article by Kelly Beatty in Sky and Telescope Magazine, featuring a 3D illustration of the SOFIA telescope by my student, Rosie.

The second semester of the 2014-15 school year was incredibly busy. I was elected to the Utah Science Teachers Association board, representing science teachers from Charter, Private, Home, and Online schools. I traveled to Chicago for the National Science Teachers Association conference to present at several sessions and to be recognized for winning the Robert E. Yager Excellence in Teaching regional award (for Utah, Colorado, and Arizona). My astronomy students embarked on a new project to work with scientists on the MESSENGER space probe and download data of Mercury. My students and I presented our work at a STEM conference and at Astronomy Day at Brigham Young University. My video production students helped to film and edit a documentary on chocolate making (a chocumentary). I will write blog posts on all of these activities over the next few weeks, but for now, one interesting thing occurred in February 2015. 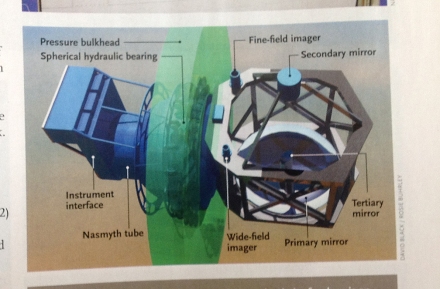 Our 3D image of the telescope assembly and bulkhead aboard SOFIA. The labels/call-outs were added by Sky and Telescope Magazine.

I was contacted by e-mail by Kelly Beatty regarding an image of the telescope on SOFIA (the Stratospheric Observatory for Infrared Astronomy) that my student, Rosie, and I had made two years before. Rosie built the parts in 3D modeling software and I assembled them and added textures. I rendered out the model from different angles and added several images to this blog. Kelly had found the image and asked if he could use it for an article he was writing for Sky and Telescope Magazine about a flight he had taken on SOFIA. I talked with Rosie’s parents and they gave permission, so I told Kelly yes. I found the original model and rendered some high-resolution images from several angles, then e-mailed them to him. 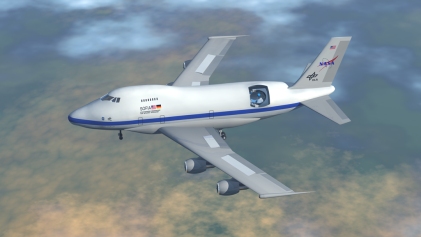 SOFIA (Stratospheric Observatory for Infrared Astronomy) 3D model built by my 6th grade Creative Computing students in 2013. The telescope assembly by Rosie is incorporated into this model (see the open window).

A couple of months later he sent me two copies of the magazine. They had added labels and call outs to the various parts. It was nice to see something we had done used to add value to his article, and that our details were accurate enough. I gave Rosie a copy as well, and she can now claim to have had her work published at the age of 14 in a national magazine. Something nice to put on a resume, along with presenting at the AAS the month before. 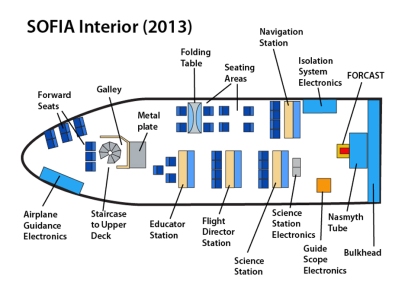 Diagram of the SOFIA fuselage interior that I drew for my 3D modeling students to learn the basic layout. We started modeling the parts, but didn’t have time in the semester to finish.

In truth, we never completely finished the model as we didn’t add some of the parts around the instrument interface and counterweights. My 6th grade Creative Computing course in 2013 had built the entire exterior of SOFIA as a 3D model and we incorporated Rosie’s telescope model into the whole. My goal was to model the interior as well, based on my own experience flying on SOFIA. I took many photos during my flight in 2013, and my 3D students during winter semester 2015 were given the assignment to create the equipment and stations inside the fuselage. I used Adobe Illustrator to draw a layout of the interior based on my photographs. We didn’t get very far on the 3D models, but I am including some of what we did here. Eventually I hope to finish it and create detailed animations to go with the video footage I took. At some point I want to return and see SOFIA again, perhaps this time with students. 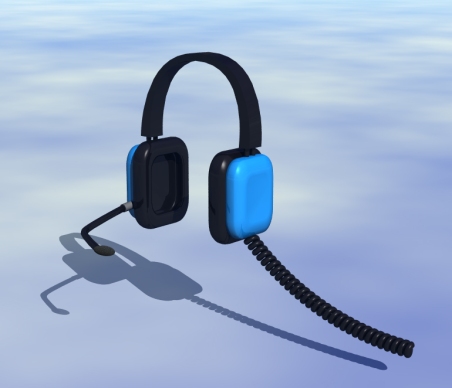 A render of a 3D headset model created by my student Casey for the SOFIA interior.

I teach courses in multimedia, 3D animation, Earth science, physics, biology, 8th grade science, chemistry, astronomy, engineering design, STEAM, and computer science in Utah. I've won numerous awards as an educator and am a frequent presenter at state and national educator conferences. I am part of the Teachers for Global Classrooms program through the U.S. Department of State and traveled to Indonesia in the summer of 2017 as an education ambassador. I learned of the Indonesian education system and taught classes in astronomy and chemistry at a high school near Banjarmasin in southern Borneo. I am passionate about STEAM education (Science, Technology, Engineering, Arts, and Mathematics); science history; photography; graphic design; 3D animation; and video production. This Spaced-Out Classroom blog is for sharing lessons and activities my students have done in astronomy. The Elements Unearthed project (http://elementsunearthed.com) will combine my interests to document the discovery, history, sources, uses, mining, refining, and hazards of the chemical elements.
View all posts by davidvblack →
This entry was posted in Uncategorized and tagged 3d animation, astronomy education, kelly beatty, science illustration, sky and telescope magazine, SOFIA, stratospheric observatory for infrared astronomy, student created projects. Bookmark the permalink.