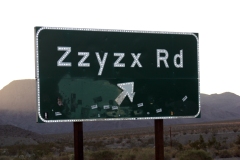 I’m somewhere I always wanted to explore: The End of the Earth. Zzyzx Road, California.

As a senior in high school I won first place in the physical science category at the Southern Utah Regional Science Fair. I built a homemade set of methanol-air fuel cells. The science was good, the research solid, but the fuel cells weren’t very useful. They only put out about 70 microamps of current, not enough to electrocute a flea. But it was enough to get me to the International Science and Engineering Fair held that year in Anaheim, California.

We drove down to the fair in several cars and a U-Haul trailer and had a great time. On the way down I-15, we passed Los Vegas, NV, and Baker, CA. A few miles further on, I saw a sign for Zzyzx Road, which seemed to me to be the end of the earth – certainly it was the end of the phone book. It seemed lifeless and barren (and I grew up in the Great Basin); all you could see was an occasional scrub brush, Joshua tree, and creosote bush. Yet I had strong desire to exit the freeway and explore Zzyzx Road, just to see where it went and why anyone would build a road there. Since then, whenever I drive down I-15 I have the same desire to explore this road to nowhere. What could possibly be out here?

Entrance to the Mojave National Preserve on Zzzyzx Road.

Well, now I know. My dream (compulsion?) has come true, and I’ve actually travelled here as a deliberate destination. On Sunday, March 18, I drove down from Orem, Utah where I live, skirting between two snow storms, and arrived at Zzyzx Road at sunset. I had to stop and take a photo of the sign, and as I turned south I saw another sign saying I was entering the Mojave National Preserve. Light was leaking away, sneaking up the sides of the distant peaks across a dry playa lakebed. I had fun slaloming my rental car along the windy road, until up ahead I saw a mirage: an oasis of palm trees and ponds on a promontory jutting out into the lakebed.

The Mojave Desert on Zzyzx Road

This is the California State University Desert Research Station. Originally it was built by a preacher named Springer who brought derelicts out from Los Angeles to get healthy doses of air, exercise, and mineral baths. After thirty years he ran up against government regulations and closed the spa. In 1976, CSU took it over as a research station to study the Mojave Desert.

I came here to actually study what life is like under extreme conditions and how it might be like life on other planets. This is a field research experiment in astrobiology; we are to study biological soil crusts, also known as macrobiotic soils. I am here to join scientists from NASA, college professors, and college students who are in teacher development programs at Cal Poly Pomona and Cal Poly San Luis Obispo. A few practicing teachers such as myself are also here to see field research and astrobiology in action and take our experience back to our students.

The lead scientists are Chris McKay from NASA Ames Research Center, Rakesh Mogul from NASA Headquarters (in the Office of Planetary Protection), Parag Vaishampayan, from JPL, and Rosalba Bornaccorsi from NASA Ames. Other scientists and engineers are here or will be coming. Our objective: to study the biological abundance and composition of biological soil crusts in the Mojave and to determine what factors influence their growth and abundance.

More on how we plan on doing this tomorrow.

I teach courses in multimedia, 3D animation, Earth science, physics, biology, 8th grade science, chemistry, astronomy, engineering design, STEAM, and computer science in Utah. I've won numerous awards as an educator and am a frequent presenter at state and national educator conferences. I am part of the Teachers for Global Classrooms program through the U.S. Department of State and traveled to Indonesia in the summer of 2017 as an education ambassador. I learned of the Indonesian education system and taught classes in astronomy and chemistry at a high school near Banjarmasin in southern Borneo. I am passionate about STEAM education (Science, Technology, Engineering, Arts, and Mathematics); science history; photography; graphic design; 3D animation; and video production. This Spaced-Out Classroom blog is for sharing lessons and activities my students have done in astronomy. The Elements Unearthed project (http://elementsunearthed.com) will combine my interests to document the discovery, history, sources, uses, mining, refining, and hazards of the chemical elements.
View all posts by davidvblack →
This entry was posted in Uncategorized and tagged astrobiology, biological soil crust, cal poly pomona, cal poly san luis obispo, chris mckay, desert research station, jpl, macrobiotic soil, mojave desert, mojave national preserve, nasa ames, spaeward bound, zzyzx road. Bookmark the permalink.