As of the last post, I had just arrived at the CSU Desert Studies Center at Zzyzx Road in the Mojave Desert, ready to begin our week-long study of biological soil crusts as an analog for possible Mars or other astrobiological organisms

Most of the chemistry and geology related activities of our stay have been recorded in my other blog, www.elementsunearthed.com, where I’ve given a detailed day-by-day summary. Let me report here the activities which were related to space science and some ideas how you might accomplish similar things in your own classroom.

On Monday, March 19, we began our field study by driving out to three locations along Kelbaker Road (between Baker and Kelso Station). The location closest to Kelso Station was known to have rich soil crusts, the site between was intermediate, and the site closest to Baker was lowest in soil crusts. In addition to collecting samples of the crusts, we sampled the soil beneath and around each site (five samples at each location) and noted each site using GPS positioning. The exact spots had been chosen at random. After dinner, Chris McKay gave a presentation on the Mars Science Lab that I recorded. He gave insight on the objectives of MSL (Curiosity) and how the science instruments will work, as well as how it ties in with what we are doing here. My partner in the SOFIA program, Carolyn Bushman, had a chance to see this same presentation with her students the week before when Chris did a videoconference with them.

Tuesday we were in the lab most of the day, extracting DNA and ATP, running chemical and mechanical tests of the soil samples, etc. There were some space science related activities happening, however. Geoff Chu, Paul Mans, and Ryan Piaget were roboticists from NASA Ames who were testing the concept of using off-the-shelf radio controlled cars to create a do-it-yourself Mars rover. They attached an Android phone to the car as a video camera, an Arduino control brick as the robotics interface, and a stereo infrared camera from a Wii game to gather 3D altitude data of the soil crusts. I sat down with them and asked some questions as they were soldering together their rover. Since I do 3D modeling and animation, I asked to use whatever data they could come up with so that my students could create 3D models of the crusts based on the IR data 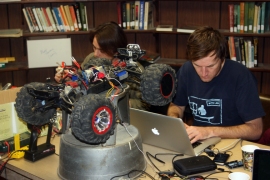 I also had the privilege of personally interviewing Chris McKay about his background and astrobiology in general, which I will add to my next post. I’ll transcribe the presentation and the interview and include them as a Word document link.

Route to Hole in the Wall, Mojave National Preserve

Wednesday we spent the morning in the lab testing for chlorophyll content in the samples, but took the afternoon to drive out to the Hole in the Wall formation on the southeast corner of the Mojave National Preserve. I was sitting in the back of the large white passenger van as we traveled on Kelbaker Road to Kelso Station (an old train depot on the main Salt Lake to Los Angeles Union Pacific line), then turned northeast along the tracks, then east onto Cedar Canyon Road. After missing the turnoff and traveling too far, we backtracked and took the turnoff south to Hole in the Wall. The part through Cedar Canyon was a very washboarded gravel road, and sitting in the back of the large van gave me quite the spinal massage. The road was so bad that one of the rental cars literally shredded a tire. I’ve never seen one so utterly destroyed.

Hole in the Wall is a formation of rhyolite similar to that found at Topaz Mt. in Utah. Vugs and holes in the rock have now eroded into fantastic shapes. While we were there, Geoff Chu and crew tested the mobility of the rover using a laptop and local wireless network to send control signals through the Arduino.

Thursday morning we studied the substructure of the soil around Zzyzx Road, as discussed in my other blog. In the afternoon, Mary Beth drove the van and Rosa drove her car out beyond Baker to look for a site she knew of where there were two billion year old stromatolite fossils. We drove northwest on State Road 127 from Baker for about an hour, then turned east onto the Old Spanish Highway to Tecopa. We accidentally traveled too far into the next valley and would have wound up in Nevada, but we turned back and found the gravel road leading east out of Tecopa (shown as Furnace Creek Road on the map). We didn’t find the exact spot where the best fossils are, but we did find some (although they were so metamorphized that they could just as easily have been layered schist). We stopped at China Ranch for date shakes (quite good) before heading back.

Location of stromatolites near Tecopa, California

This whole excursion makes me think of how difficult it will be to find evidence of life on another planet. Here we were on Earth having trouble telling the difference between schist and stromatolites. Any organic materials were long gone, regardless, after two billion years. After having been buried, squeezed, partially melted, uplifted, eroded (and a few other things besides) it becomes hard to tell a fossil from any other rock around it. If we find some type of reaction in soil samples on Mars, how do we know it is life or just some sort of exotic soil chemistry brought on by the unique conditions of the planet? That was the major problem with the Viking timed-release experiment in the 1970s: according to the standards set for the experiment in advance, it did detect life signs. But perhaps the standards were wrong to start with. The controversy is still going on. Mars Science Lab might find similar results – not clearly life signs but possibilities. The only real way to know for sure is to get samples back to Earth for rigorous examination or to send biologists and geologists to Mars to study samples in situ.

Driving across the Mojave Desert on Hwy 127

After returning for supper at 5:00, we did a final outing to our soil sites on Kelbaker Road to gather data with the rover. It was the evening of the equinox, and the sun set directly behind Baker as we returned to first the Intermediate and then the High locations. The rover’s IR camera collected data from each site at these two locations, but they had to put a frame around it and hang cloth from it to prevent the setting sun from interfering with the IR data, while still having enough light for the imaging camera to work.

Vernal Equinox in the Mojave Desert

Afterwards, back at the vehicles, I had the fun job of leading a star show. Out here in the desert the stars are very bright, and with Jupiter and Venus lined up in the west and Mars going through retrograde motion in the East, with the winter constellations still in the sky, it was an ideal time to do a star show and better than any planetarium. I borrowed a green laser pointer and led the others through the constellations, stars, and planets that were visible. For me, this was the highlight of the whole trip (although I have enjoyed every part of it). Dr. McKay was in Las Vegas, so I was the next best star expert (which surprised me, but most of the others were biologists not astronomers).

On Friday morning, after launching a weather balloon, we reported out our findings. I helped Mary Beth to talk about the soil chemistry, and also showed my sample 3D images from a test we did of the IR camera on Tuesday night and explained how my students will model the data. I look forward to seeing the final results after the lab tests come back. I also interviewed our project leader, Dr. Rakesh Mogul of the NASA Office of Planetary Protection, before we all took off for our separate destinations.

As a final note on the Mojave experience, here are some lessons I learned about setting up and running a field research study. As a science teacher, I fully believe we should get our students into the lab as often as possible and even get them into the field to collect data which can be brought back to the lab for analysis. Students should become scientists instead of just learning about science. That is why I proposed a project out in Eureka, Utah to study how well the EPA superfund cleanup has actually remediated the soil contamination there. It will get my students out asking questions, collecting data, analyzing the samples, and drawing conclusions, just as real scientists do. The American Chemical Society will provide $1500 for this project.

Yet field studies are hard to plan and manage and inexperienced teachers often get in over their heads, collecting far too much low-quality data to ever be analyzed. Here are some things we did well, and how I will apply the lessons to our upcoming project:

David Black at Hole in the Wall

There are many more lessons to be learned, such as keeping things simple and not biting off more than you can chew (or get done in a school year while still teaching your core curriculum). Many teachers shy away from field research or even doing labs because it seems to take away from the core knowledge the students have to regurgitate on final tests. It also takes a lot of work, and some teachers just don’t care enough to put in the effort. But with some creativity and careful management, field research and inquiry labs can actually help meet state objectives more efficiently than standard lectures. I’ve seen entire schools that have moved to project-based learning and their students not only do well on state tests, they are more energized and excited about science. I hope to move in that direction.

I teach courses in multimedia, 3D animation, Earth science, physics, biology, 8th grade science, chemistry, astronomy, engineering design, STEAM, and computer science in Utah. I've won numerous awards as an educator and am a frequent presenter at state and national educator conferences. I am part of the Teachers for Global Classrooms program through the U.S. Department of State and traveled to Indonesia in the summer of 2017 as an education ambassador. I learned of the Indonesian education system and taught classes in astronomy and chemistry at a high school near Banjarmasin in southern Borneo. I am passionate about STEAM education (Science, Technology, Engineering, Arts, and Mathematics); science history; photography; graphic design; 3D animation; and video production. This Spaced-Out Classroom blog is for sharing lessons and activities my students have done in astronomy. The Elements Unearthed project (http://elementsunearthed.com) will combine my interests to document the discovery, history, sources, uses, mining, refining, and hazards of the chemical elements.
View all posts by davidvblack →
This entry was posted in Uncategorized and tagged astrobiology, baker california, china ranch, chris mckay, csu desert studies center, curiosity rover, field research, hole in the wall, kelso depot, life on mars, macrobiotic soil, mars rover, mojave desert, mojave national preserve, soil crust, stromatolite, zzyzx road. Bookmark the permalink.