Posted on December 7, 2012 by davidvblack 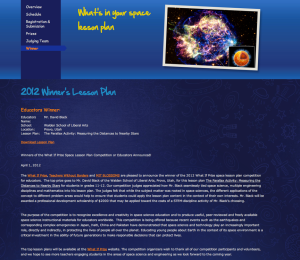 What If Prize Competition Winner Page for 2011.

On New Year’s Eve last year I applied to the “What if?” Prize, a competition for teachers to submit lesson plans on astronomy or space science. I knew the odds were probably low given it was an international competition, but I needed to update some lesson plans anyway and decided this would be a good excuse. My lesson was on how to use trigonometric parallax to calculate the distance to nearby stars. It involved a student activity which simulated this process through laying out a diagram of planets and stars on the school parking lot.

Several months passed and I had almost forgotten about it when I received an e-mail informing me I had won first place! (Here’s the website: http://www.whatifprize.org/educators_winner_2012.php) It involved a $2000 award for professional development, which I used to travel for two weeks in Colorado and document the history of mining towns (for more information on this trip, visit my other blogsite at: http://elementsunearthed.com) .

Parallax Activity Diagram, with an example of calculations for Planet 1 to Star A.

One of the sponsors of the competition is the MIT BLOSSOMS project. I was asked by Dr. Dick Larsen of MIT to create a video version of the lesson plan. It would be uploaded to the BLOSSOMS website (http://blossoms.mit.edu/ ) and shared through the web, VHS tapes, etc. with classes throughout the world, even in countries without much Internet access. 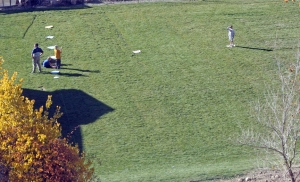 Parallax Activity as seen from the hill behind Walden School.

I have been working on this video gradually since June. I had to first write up a complete script and get it approved, then film all the scenes and edit it all together. Once approved, I scouted out locations around my school to film the video.

Over the summer, I had a student help me film the outdoor scenes. Since school began in August, my Media Design students have helped film the remainder of the scenes. We painted one wall of our media lab green in order to do some chroma key scenes, used a dolly to create moving shots of me on the balcony of our school, attached a Flip camera to the rear-view mirror of my car and drove from our school to Provo Canyon and back, etc.

Filming the parallax activity from the school balcony.

We finally filmed the actual activity on our new practice field a few weeks ago, right before the weather turned. I filmed my astronomy students actually doing the activity and I also had my Jr. High Creative Computing class film the same scene on a different day, including getting two camera angles, one from the balcony of the school and one from the hill behind us looking down on the field. I also had students film close ups with a Flip camera.

Showing my junior high students how to use the Panasonic camera to film the parallax activity.

My camera went on the fritz for a few weeks and was sorely needed to capture some of the footage, but I got it back from the shop just before Thanksgiving. I’ve been working every evening since then to get the footage all edited down and to build the scenes in my script, all 24 of them. It’s taken quite a bit of creativity to put it all together to make sense, but I think I am succeeding rather well. I found that I need to make some modifications to my lesson plan (such as improving the data tables in the student worksheet), but the original idea is intact and working well.

The parallax method of measuring the distance to nearby stars relies on the apparent shift of a star close to us compared to more distant stars as our Earth orbits around the Sun each year. Compared to the further stars, a nearby star will seem to wiggle back and forth each six months. The larger the angle of the wiggle (the parallax angle) the closer the star is. You can draw a right triangle between the Earth, the Sun, and the star we want to measure. We know the average distance to the sun quite accurately (149, 597, 871 km), which is the opposite side of the triangle from the parallax angle. What we need to do is use the tangent function to calculate the adjacent side (the distance from the Sun to the star).

Let’s use an example. In my lesson plan, the teacher lays out a diagram on a practice field or parking lot with several planets (represented by chalk circles or cut out poster board) in a line with the Sun in the center, and a line of stars perpendicular to the planetary line laid out from the Sun as well. We measure the distance from the Sun to the first planet (let’s say it’s two meters) and find the angle from the star between our sun and the planet is 30 degrees. We take the tangent of 30 and set it equal to 2 meters over the distance to the star. Solving for the distance, we get about 3.47 meters from the Sun to the star. 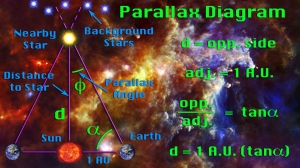 Parallax Diagram. As the Earth orbits the Sun, nearby stars seem to wiggle back and forth compared to the background stars.

In reality even the closest stars are very far away. Their parallax angles are all less than one arcsecond of a degree (one 3600th of a degree). A star that would have a parallax angle of exactly one arcsecond is said to be one parsec (pc) away, which is a unit of distance often used in astronomy. One parsec is about 3.26 light years.

To practice using the tangent function, we calculated the height of Mt. Timpanogas from Walden School using our quadrant to find the angle.

You can use free astronomy software such as Stellarium and look up the parallax angles for many stars in the database. Using one astronomical unit (the distance from Earth to the Sun) as the opposite side, we can calculate the distance to a star in kilometers. You’ll need a calculator with scientific notation to handle this, as it will be a huge number. But then you can divide that number by the number of kilometers in a light year (another huge number) and you’ll have the distance in light years.

The Distance Ladder: Overlapping techniques for finding the distances to objects in space.

This parallax method is only good out to about 100 light years or so using measurements from the ground. If we get out into space above the atmosphere, we can measure the parallax angles with much more precision and extend the technique out to about 1000 light years. But beyond that, you need other methods such as the distance modulus formula comparing absolute and apparent magnitudes for stars.

Beyond about 100,000 light years, you need to use Cepheid variables to determine distances, such as how Edwin Hubble found the distance to the Andromeda galaxy. The absolute magnitude of Cepheid variables can be calculated very precisely even at large distances because the rate at which they pulsate is directly tied to their peak brightness. This was first noted by Henrietta Leavitt. But eventually you can’t distinguish Cepheid variables from other stars in a distant galaxy, and you need to use Type 1 Supernovas to find the distances, since they always have a specific brightness as well and can be seen much further away than Cepheid variable stars. However, these types of supernovas don’t happen all that often, so you have to wait for one to be able to get an accurate distance for a particular galaxy.

Another version of the Distance Ladder.

For very distant objects out at the edge of known space, we have to use the Hubble equation of red shifts to find how far away they are. The Hubble constant value depends on your model of the universe, but at least we know that a highly red-shifted galaxy must be billions of light years away. In the end, however, all of these techniques rely on parallax as the first rung of the distance ladder. This is why I chose to create a lesson plan about this technique, because all others depend upon it. I have another lesson plan about the distance modulus formula, but that will wait until next time. As my astronomy students work through my unit on the stars, I will share the lesson plans they’re doing with you.

Here is the lesson plan for our simulation of stellar parallax:

I teach courses in multimedia, 3D animation, Earth science, physics, biology, 8th grade science, chemistry, astronomy, engineering design, STEAM, and computer science in Utah. I've won numerous awards as an educator and am a frequent presenter at state and national educator conferences. I am part of the Teachers for Global Classrooms program through the U.S. Department of State and traveled to Indonesia in the summer of 2017 as an education ambassador. I learned of the Indonesian education system and taught classes in astronomy and chemistry at a high school near Banjarmasin in southern Borneo. I am passionate about STEAM education (Science, Technology, Engineering, Arts, and Mathematics); science history; photography; graphic design; 3D animation; and video production. This Spaced-Out Classroom blog is for sharing lessons and activities my students have done in astronomy. The Elements Unearthed project (http://elementsunearthed.com) will combine my interests to document the discovery, history, sources, uses, mining, refining, and hazards of the chemical elements.
View all posts by davidvblack →
This entry was posted in Uncategorized and tagged astrometrics, astronomy lesson plan, distance to star, light year, mit blossoms, nearby star, parallax, parsec, tangent, what if prize. Bookmark the permalink.