Astrobiology at the Great Salt Lake 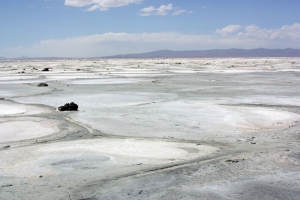 An “alien” planet with no sign of life – yet life exists even here.

This week I had the opportunity to visit one of the strangest, most alien landscapes on Earth. And it’s right in my neighborhood: The Great Salt Lake in Utah. I was at the Bear River Migratory Bird Refuge near Brigham City for a two-day workshop on extremophiles living in the harsh conditions of the lake.

The Great Salt Lake is a remnant of a much larger freshwater lake called Lake Bonneville, which covered most of western Utah during the Pleistocene Epoch over 10,000 years ago. Because the Great Basin has no drainage to the ocean, any water that flows into it stays there and can only escape through evaporation. When climate was wetter and cooler during the last ice age, more water flowing in than evaporated out and Lake Bonneville gradually formed. As it grew and deepened, it cut a series of wave terraces on the edges of the mountains where the University of Utah and Brigham Young University are now located. I live on one of these shorelines, an old delta deposit where the Provo River emptied into the lake and left many well-worn quartzite rocks in my backyard. 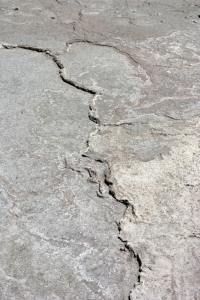 Ridges of salt on the lakebed

After a dramatic flood through Red Rock Pass in Idaho dropped the lake level, it stabilized at the university shoreline. As the climate changed, more water evaporated and less water flowed in and the lake gradually dropped. It left behind four remnant lakes: Sevier Lake, near where I grew up where the Sevier River and Beaver River empty, which is now dry most of the time; Utah Lake, near Provo, which is more or less a freshwater lake (it overflows into the Jordan River which empties into the Great Salt Lake); Bear Lake, a nice freshwater lake on the Utah-Idaho border which empties into Bear River; and the Great Salt Lake. As the lowest of the four, all the minerals and salts washed in to the other lakes eventually wind up here, never leaving. Huge saltpans are left (the Bonneville Salt Flats) between Tooele and Wendover.

The Spiral Jetty, built by Robert Smithson in 1970.

As the lake became saltier, the life in the lake was forced to adapt to the extreme conditions. No fish can live there now, but many forms of bacteria and archaea (single-celled organisms that are often found in extreme conditions, such as Yellowstone hot pots), brine shrimp, and brine flies are able to survive there. The migratory birds at the refuge, which include white pelicans, egrets, ducks, geese, and many more, eat the shrimp and flies and use the wetlands where the rivers empty into the lake. An entire ecosystem flourishes here, in one of the most inhospitable places on Earth.

A Mirage at the Edge of Salt and Sky

Participants in the workshop traveled out through the Promontory Mountains past the Golden Spike museum (where the transcontinental railroad was completed in 1869). Beyond that, the road became gravel and led us to the north arm of the lake, called Gunnison Bay. Because of a railroad causeway built across the lake in 1959, the north arm doesn’t mix much with the rest of the lake, and since no rivers empty into the northwest area of the lake (only seasonal washes and not much of that), the north arm has become increasingly salty, up to about 30% during late summer compared with 5-15% for the rest of the lake. The salt eventually becomes saturated and halite crystals form on the bottom of the lake. 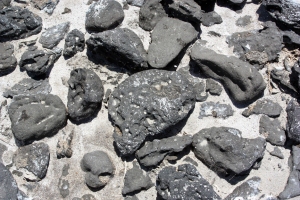 We arrived at the Spiral Jetty and walked out over the lakebed. Here in mid June, the lake has reached its seasonal peak and is beginning to recede, leaving behind circular depressions of supersaturated salt rimmed by sticky black mud. Gradually the salt depressions become wetter as you walk further out, until the edge of the lake is reached. We collected samples of the salt, hoping to culture some bacteria or archaea living in the crystals.

The shore of the lake was encrusted with salt and the basalt rocks strangely eroded. Brine flies swarmed around us. In some spots, small pools of tar have oozed up and left dark smudges on the white salt. This tar is probably from ancient life that has died in the lakebed and turned to oily ooze. Some exploratory drilling has been done along the north shore (there is another jetty to the east of Spiral Jetty) but no commercial deposits have been found.

We also put together Winogradsky columns at the jetty, which consist of sediment, lake water, and a carbon source (some tumbleweed in my case). Over weeks, the organisms will form colonies that will create colored bands in the column, which can be cultured and studied. These are named after Sergei Winogradsky, who was the first scientist to discover bacteria that can metabolize sulfur.

Our objective is to use these experiments in our classes to discuss the conditions necessary for life, how life can be very different even on earth, and how life is able to survive in extreme conditions analogous to where we might find them on other planets. In the Great Salt Lake, organisms must not only survive the extreme salt, but also high levels of UV light and large temperature extremes, from 80° water in high summer to almost freezing in winter. Because of the UV light, the organisms in the lake have developed carotenoid pigments that absorb UV light and prevent excess DNA damage. They are also anti-oxidants. These pigments give the archaea a pink to red color, which gives the lake a pinkish tinge in the summer.

The Spiral Jetty itself is quite an interesting thing, It was an art project designed and built by Robert Smithson, an abstract artist, in 1970. He was looking for a place where red water, white soil, and black rocks combined, and found it on the north shore of the Great Salt Lake. He hired local contractors to build the jetty out of the basalt rocks. It became well known in art books. During the 1980s when we had a wet cycle for several years, the jetty was underwater and it finally re-emerged in the early 2000s. Talk about an emergent art form . . . Since it was built during a period of drought, it is more often underwater than above, and we were fortunate to see it.

Stripes and Spiral. The pink color comes from the carotenoid pigments in the archaea in the lake, the white stripes from salt blown by the wind.

There was a strong wind from the southwest blowing across the lake, churning the surface into foam (probably the foam comes from lipids produced by the organisms in the lake). Streaks of pink and white blew across the lake and collided with the spiral as pelicans fought the wind. It was strangely beautiful in its starkness.

Our second day we spent at the refuge, practicing activities and learning more about the biology of the lake. We invented possible organisms on exoplanets that could exist in various environments, such as an inland sea, a methane lake, the bottom of an ocean, or arctic ice. We learned about the specific adaptations of some of the organisms in the lake. We also learned about ongoing studies of salt layers deposited under New Mexico and Kansas (the Salado) and how a team at Westminster College was able to find cellulose fibers and DNA strands in 253 million year old salt. This is the same salt layer as the salt mine outside Hutchinson, Kansas that I visited four years ago, where a group found whole cells preserved in the salt. The Westminster team did not find cells.

This is a pilot program, and we will teach these activities in our classes this year. I am teaching astrobiology this fall, and this will work out very well for me. The program is developed by the University of Utah Genetics Lab and the Great Salt Lake Institute at Westminster College. Here is a link to their online resources: http://learn.genetics.utah.edu/content/gsl/

I teach courses in multimedia, 3D animation, Earth science, physics, biology, 8th grade science, chemistry, astronomy, engineering design, STEAM, and computer science in Utah. I've won numerous awards as an educator and am a frequent presenter at state and national educator conferences. I am part of the Teachers for Global Classrooms program through the U.S. Department of State and traveled to Indonesia in the summer of 2017 as an education ambassador. I learned of the Indonesian education system and taught classes in astronomy and chemistry at a high school near Banjarmasin in southern Borneo. I am passionate about STEAM education (Science, Technology, Engineering, Arts, and Mathematics); science history; photography; graphic design; 3D animation; and video production. This Spaced-Out Classroom blog is for sharing lessons and activities my students have done in astronomy. The Elements Unearthed project (http://elementsunearthed.com) will combine my interests to document the discovery, history, sources, uses, mining, refining, and hazards of the chemical elements.
View all posts by davidvblack →
This entry was posted in Uncategorized and tagged archaea, bacteria, bear river, brine shrimp, carotenoid, conditions for life, extremophile, great salt lake, halite, halophile, ice age, lake bonneville, migratory bird refuge, promontory point, robert smithson, salado, salt mine, spiral jetty, thermophile, winogradsky. Bookmark the permalink.