Carolyn Bushman, my partner in the SOFIA AAA program

Today I got to finally meet SOFIA, the Stratospheric Observatory for Infrared Astronomy. I was selected as an Airborne Astronomy Ambassador (AAA) for SOFIA in January, 2012, and this week I will be at Dryden Aircraft Operations Facility (DAOF) near Palmdale, CA where SOFIA is housed and maintained. I will get to fly aboard SOFIA two times: Tuesday night and Thursday night. It has been a long time coming, and it is finally here!

My flight to Burbank was at 6:00 a.m., so I forced myself to get up at 3:00 and get ready, then my wife drove me to the airport. I checked my bags at the Skycap at Southwest airlines, and I worked through security and down to gate B22 at the end of the terminal. I met up with Carolyn Bushman, my partner on this project. I am bringing quite a bit of audio-video equipment in order to document our experiences and turn it all into a 30 minute video that will be on my YouTube Channel and possibly on the SOFIA website.

We boarded the plane, which was not very full, so we could spread out. This was the first time I had plenty of room for I don’t know how long. But it was too good to be true. As we pulled away from the terminal, the pilot came on to announce there was a mechanical problem and that we had to go back. We waiting for over 30 minutes and they announced that passengers connecting to Burbank would have to disembark and get on another flight, this time connecting through Phoenix instead of Las Vegas. It would get us to Burbank two hours later. We did as requested, and boarded the other plane, which was completely full. Then the pilot of that plane came on to announce there would be a wait due to a missing lens cover on an LED indicator light. After about 45 minutes, we were finally cleared to depart. This wasn’t a very good way to start.

Western end of the Grand Canyon

One benefit of this alternate flight was that we flew over Oak City and could see Delta and Deseret well. We flew east of Zion National Park and could see the white layers of Navajo sandstone and the Coral Pink Sand Dunes very well out of our right side seats. We also flew over the western portion of the Grand Canyon.

Arriving at the Dryden Aircraft Operations Facility, or DAOF, in our flight jackets.

I called Dana Backman, the lead EPO person for the SOFIA program to tell him we would be late. We arrived at Burbank (flying right over Palmdale) at about 10:30 local time. We met Dana at the baggage claim, where my luggage didn’t arrive. I went into the baggage office and found it was already there, and had arrived long before I did on another flight. Probably our original one. We also met Dan Ruby and Matt Oates from the Reno, Nevada area who would be joining us for this week.

Dana gave us our nice NASA blue flight jackets and we drove to I-5 and northwest through the San Fernando Valley, taking Highway 14 north through the San Gabriel Mountains to Palmdale and Antelope Valley. We dropped off our luggage at the Hilton Garden Inn and walked to Olive Garden for lunch. We then drove out to the DAOF facility and got temporary badges. Walking into the main hangar building, we got to meet SOFIA for the first time. She filled up the east end of the hangar, her vertical stabilizer almost brushing the ceiling. We took pictures outside and inside.

Our first look at SOFIA

We returned to the hotel to relax for a couple of hours, then returned to DAOF for Egress Training at 7:00, which showed us how to exit the plane in case of emergencies. They had equipment that you won’t find on a standard commercial flight, such as a hood that fits over your head that will inflate, various types of breathing systems, survival guides, etc.

We met a graduate student named Marisa who was here from Leyden University in the Netherlands. She will be on board as a GI (Graduate Student Investigator) to collect data on polycyclic aromatic hydrocarbons (PAHs) found in protostars and the interstellar medium. We invited her to dinner with us at Claim Jumper and all had a nice conversation. She told me about a program that can bring in .fits files and assign them to RGB values in a way that’s much easier than trying to convert them to Photoshop.

SOFIA in the main hangar at DAOF.

Since we are going onto vampire time (as astronomers must do), we were to stay up as long as possible. I worked on recording the narration and capturing and editing it for the introduction to my planned video. I went to sleep around 3:15.

Vibration isolation system for the telescope assembly inside SOFIA

I’m very excited to be here and for my first experience flying aboard a mobile telescope. I’ve done some astral photography at Mt. Wilson Observatory (not too far from here) and have visited other observatories and looked through their scopes, but this is a unique experience to fly with NASA’s mobile observatory, one of the Great Observatory missions. SOFIA combines the complexity of a facility-grade telescope with the complexity of a 747SP aircraft which has undergone extensive modifications (including cutting a big hole in the fuselage), with the complexity of the vibration isolation systems and control and data acquisition features unique to this situation. I look forward to tomorrow night to see how it all works. 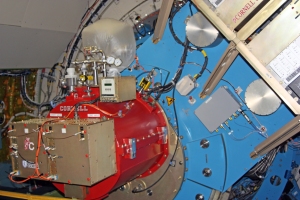 The FORCAST instrument mounted to the telescope flange on SOFIA.

I teach courses in multimedia, 3D animation, Earth science, physics, biology, 8th grade science, chemistry, astronomy, engineering design, STEAM, and computer science in Utah. I've won numerous awards as an educator and am a frequent presenter at state and national educator conferences. I am part of the Teachers for Global Classrooms program through the U.S. Department of State and traveled to Indonesia in the summer of 2017 as an education ambassador. I learned of the Indonesian education system and taught classes in astronomy and chemistry at a high school near Banjarmasin in southern Borneo. I am passionate about STEAM education (Science, Technology, Engineering, Arts, and Mathematics); science history; photography; graphic design; 3D animation; and video production. This Spaced-Out Classroom blog is for sharing lessons and activities my students have done in astronomy. The Elements Unearthed project (http://elementsunearthed.com) will combine my interests to document the discovery, history, sources, uses, mining, refining, and hazards of the chemical elements.
View all posts by davidvblack →
This entry was posted in Uncategorized and tagged daof, dryden aircraft operations facility, egress, FORCAST, interstellar medium, pah, polycyclic aromatic hydrocabons, SOFIA, stratospheric observatory for infrared astronomy. Bookmark the permalink.