An Article for The Science Teacher 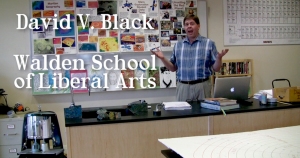 Title frame from my video explaining the nearby star model activity.

Over a year ago I wrote an article for The Science Teacher, the journal of the National Science Teachers Association geared for high school teachers. I’ve known two of the authors of a column for that magazine, called Science 2.0, about technology tools for teaching science. They are Martin Horejsi and Eric Brunsell, whom I got to know through the NASA/JPL Solar System Educators Program back in 2000 to 2004. I also had a chance to sit in on a focus group for TST two years ago at the NSTA conference in Indianapolis, where I met the editor, Steve Metz. I decided then that I should write an article at some point, and with a lot of effort, I finally did.

Cover of The Science Teacher, Summer, 2014. My article is inside!

The article is on an activity I do in my astronomy classes: to build an accurate 3D model of the nearby stars out to 13 or more light years. I’ve described this activity in detail in a previous post (http://spacedoutclass.com/2013/05/05/the-nearby-stars/). For the article, I wrote up an abridged description, edited the graphics I’d made for my original lesson plan, and followed the manuscript submission process online.

These articles are peer reviewed, but it took several tries to find reviewers who would look over the article, so it was delayed about five months. I’d almost given up hope, when I suddenly received a message and the review notes from Steve in November. The review had good suggestions, plus a note about another article written by Tracy Furutani, a professor at a college in Washington, who had authored an article in Astronomy Education Reviews with a similar activity. I had to address how my version was different and (I believe) better. I had not ever heard of this article; I had known of a small model written up by the NASA Advanced Concepts group, but came across that after I had developed my own model.

Title page for my article in The Science Teacher magazine, Summer, 2014.

The main differences are that my model hangs from a platform, which in turn hangs from the ceiling and allows more precise positioning. The other models are built from the ground up, either sitting on straws or on wires. It would be very difficult not to bump the stars and knock them out of position with a floor model; mine keeps the stars in place by gravity. Mine also uses trigonometry to find the stars’ positions more accurately.

Pages 32-33 of my article. I created all the graphics and captions as well as writing the article.

My revisions were complete by the deadline during the first week in December. Then the article went to editors to review. Mine was Steve Stuckey, and the edited version was definitely shorter and better than my original, with some of the detailed materials, such as follow up assignments, moved to a website for download. Once the writing was done and we all agreed on it, I worked on final versions of the graphics. I changed the fonts, added more details, and cleaned up the line art.

Pages 34-35 of my article for The Science Teacher.

By late April, the initial layout was done and Steve sent me a draft version with graphics, photos, etc. in place. I could only see one change, which was to add my middle initial to my name. There are too many other David Blacks out there, so I usually use my middle initial, which will bring people right to me in a Google search.

Steve also requested that I create a video explaining the activity, which would be included with the online iPad version. So in between all the other craziness at the end of April and start of May, I filmed myself explaining what the activity was for, why it was a good idea, how to build the platform, how to make the stars, and additional ancillary activities and materials teachers can use. I recorded it in the science lab, which has bad resonance, but the video was at least of good quality and decently lit. I edited the pieces together without too much fancy stuff (Steve didn’t want much of that) and submitted it via Dropbox. It wound up being too big of a file, so I had to compress it and resend. This was all by May 20th or so, right before graduation (I was working on three other videos and a grant application at the same time).

A still frame from the video I made explaining the 3D star model activity. I’m demonstrating how to make and hang the stars.

Yesterday the magazine arrived and there was my article starting on Page 31. It has been a very long road since I first attempted to do this activity back in 1993 at Juab High School. I’ve done it many times since, including at my NASA Explorer Schools workshops at JPL, at Provo Canyon School, and now at Walden School of Liberal Arts. I’ve made a smaller scale model that I take to workshops as well as the full-scale model’s stars and platform.

There’s actually a rather clever pun here . . . In college, I sang this poem as a song in BYU’s Oratorio Choir. The middle photo on this inserted page is of M16, the Eagle Nebula. I took this photo myself using the 24 inch reflector at Mt. Wilson Observatory as part of the TIE (Telescopes in Education) program.

Since the last time I had my students make the model in class, two more star systems have been discovered by Kevin Luhman, an astronomer with Pennsylvania State University’s Center for Exoplanets and Habitable Worlds. These systems are now considered to be the 3rd and 4th closest star systems to us. 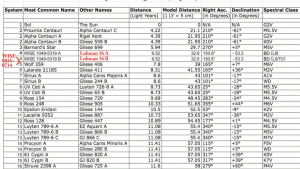 A list of the nearest star systems. Since I published this, a new star system 7.2 light years away has been discovered.

He used data from WISE (the Wide-field Infrared Survey Explorer) to locate the first system, now called Luhman 16 or WISE 1049-5319. This system is binary, with a late type L star and a T type star orbiting each other. Although they are called brown dwarfs, their actual color would be closer to magenta. Observations with large telescopes have shown that Luhman 16b has a fairly plain atmosphere but that Luhman 17b has a crazy, turbulent atmosphere with hot and cold patches where it could be raining silicates and molten iron. They were able to determine the temperature and appearance of the atmosphere using Doppler imaging techniques. Here’s an article about it: http://www.pbs.org/wgbh/nova/next/space/the-first-weather-map-of-a-brown-dwarf/

A surface map of the brown dwarf star Luhman 16B, created by Doppler imaging.

Luhman 16a and b have an orbital period of 25 years. Astrometric observations (measuring the exact position of a star compared to others in the same field) show a wobble in the stars’ paths that may indicate a large Jupiter-class planet orbiting one of them at about 3 AUs. This system is only 6.6 light years away, in the constellation Vela. It is has knocked Wolf 359 out of its standing as the third closest star system to Earth after Alpha Centauri and Barnard’s Star. It’s also the closest system to Alpha Centauri.

A comparison of different sizes and colors of stars. The large yellow disk at the left is our sun. The next star is an M5-6 red dwarf. The next is an L-class brown dwarf. The next is a T-class brown dwarf, which is actually more magenta in color. The far right object is Jupiter. Notice Jupiter is actually a bit larger than the red or brown dwarfs, but it is much less dense. The T-class brown dwarf is at least 13 times the mass of Jupiter, and has just enough mass and density to ignite deuterium fusion in its core. But what of the objects between Jupiter and L-class stars? Are they really stars if no fusion occurs?

Kevin Luhman has also discovered another nearby brown dwarf just this year (2014), called WISE 0855-0714. This one so small and cool that it should probably be classified as a sub-brown dwarf or Super Jupiter (Super Juper?) and could be a rogue planet instead of a star, with 3-10 times the mass of Jupiter. Since a mass of 13 or more Jupiters is needed for deuterium fusion, this object cannot really be considered a star. It’s surface temperature is estimated to be 225 to 260°K, or -48 to -13°C, about the temperature of a balmy day in Antarctica. It has a high proper motion and large parallax, with a distance of about 7.2 light years, and is located in the constellation Hydra. Which means Wolf 359 has gotten kicked down to fifth place. Here’s an article about this rather cool object: http://www.nasa.gov/jpl/wise/spitzer-coldest-brown-dwarf-20140425/#.U6nK5M1Tw0M

Distances of the Sun’s closest neighbors. The next star out (at least for now) is Wolf 359.

All of this goes to show that we don’t yet know everything there is to know about our stellar neighborhood. Entire star systems have been hiding in plain sight, with some amazing characteristics. My article is already obsolete, and it just came out yesterday.

I teach courses in multimedia, 3D animation, Earth science, physics, biology, 8th grade science, chemistry, astronomy, engineering design, STEAM, and computer science in Utah. I've won numerous awards as an educator and am a frequent presenter at state and national educator conferences. I am part of the Teachers for Global Classrooms program through the U.S. Department of State and traveled to Indonesia in the summer of 2017 as an education ambassador. I learned of the Indonesian education system and taught classes in astronomy and chemistry at a high school near Banjarmasin in southern Borneo. I am passionate about STEAM education (Science, Technology, Engineering, Arts, and Mathematics); science history; photography; graphic design; 3D animation; and video production. This Spaced-Out Classroom blog is for sharing lessons and activities my students have done in astronomy. The Elements Unearthed project (http://elementsunearthed.com) will combine my interests to document the discovery, history, sources, uses, mining, refining, and hazards of the chemical elements.
View all posts by davidvblack →
This entry was posted in Uncategorized and tagged astronomy lesson, brown dwarf, close stars, constellations, kevin luhman, light year, manuscript, models, nearby stars, newly discovered stars, ngss, nsta, rogue planet, science and math, stellar abundance, stellar classes, stellar neighborhood, super jupiter, types of stars, WISE mission. Bookmark the permalink.