I haven’t written any posts recently for this blog for several reasons: partly because I’m not actively teaching astronomy or astrobiology this semester (winter 2014) and partly because I’ve been so busy with so many things that I haven’t had time to stay up to date. I’ve written several grants, traveled to Boston to present at the National Science Teachers Association conference, taken an online class to prepare for our move to an International Baccalaureate school, finished a video for the Loveland Living Planet Aquarium, etc. But in the midst of all this craziness there have been developments related to astronomy education. I will explore each of these in more detail in later posts, but for now here’s a rundown/summary of what’s happening in my life:

I met Dr. Eric Hintz of Brigham Young University’s Physics and Astronomy Department while at the AAS meeting in Washington, D.C. this January. He told me more about the NSF funded Research Experiences for Teachers (RET) program at BYU. As soon as I returned home I filled out the online application. I was notified in April that I have been accepted into the program and will work with Dr. Hintz for a 10-week period this summer. It carries a stipend roughly equal to my salary at Walden School and I will be an Adjunct Research Faculty there for the summer. I get to be a professional astronomer and make some extra money, plus bring back $1200 worth of equipment to my classes!

22 micron filter image of the same target. It has been inverted to better see the stars. The blue circle is the target coordinates, but in this case, the cluster of stars has created source confusion in the software. The bright star to the east (left in this image) is probably the actual red giant we want to study. It gets brighter in WISE 1 through 4 whereas the other stars get dimmer. This is also a great deal of nebulosity, as one would expect for a star cluster.

In my frequent search for opportunities in aerospace education, I looked through the Air Force Association website. I had received a small grant from them several years ago that helped fund our science demonstration/showcase program at Walden, where students develop lesson plans and demonstrations that they present to classes in our elementary school and to the public at an evening Science Showcase. Looking through the site, I came across an application for a Teacher of the Year award available through each chapter of the AFA. There are three chapters in Utah, and given my background with NASA educational programs, I figured I had a good shot. I applied in February and received a phone call from Grant Hicenbotham on April 17 (right in the middle of parent teacher conferences) that I had won the Salt Lake Chapter award and the State AFA Teacher of the Year award. There would be a cash award and a salmon barbeque dinner at the Hill Aerospace Museum on June 18.

Since we have now chosen our topic to study for NITARP (red giant stars that may be consuming their own planets), our next step is to develop a solid list of target stars to study. The four teachers (myself, John, Stef, and Elin) have held telecons with Dr. Rebull each Monday at 5:00 to write up our proposal, develop a master list from three previous papers that studied stars that had excess lithium and unusually fast rotation. We’re going to take the next step and look to see if the same stars have an excess of IR radiation in bands that would indicate a shell or ring of dusty debris orbiting around it, leftover from planets that have been pulled apart. But not all of the stars on the lists for the respective papers are good candidates (or possibly not even stars). So after we merged the lists, we’ve gone through each star in Finder window of IRSA, which is a software package that allows the images in IPAC to be loaded and analyzed. 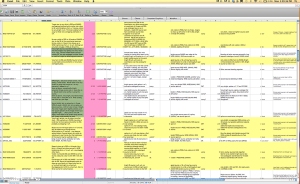 Sample of the merged list of stars – yellow areas are stars I’m assigned to analyze for our final decision (all of us did all the stars for the first run through). Pink areas are the average and standard deviation of ratings.

We’re searching through several missions, including DSS (the Digitized Sky Survey, an Air Force mission to identify natural IR sources to prevent heat-seaking missiles from getting spoofed by false targets), 2MASS (the Two-Micron All Sky Survey), WISE (Wide-field Infrared Survey Explorer), and IRAS (Infrared Astronomy Satellite). It’s been a tedious job to analyze the images and see if we have a good point source – not too bright or saturated, but without other stars overlapping the target star. The IRAS data and early DSS data was gathered several decades ago and some of the stars have high enough proper motions that they have drifted in the field of view. Some of the images have so many sources clumped together in star clusters that the software that did the data reduction got confused. In some cases we have nebulosity or other sources of contamination. As of this writing in mid-June we are going through the list of worrisome stars and deciding which ones to drop. 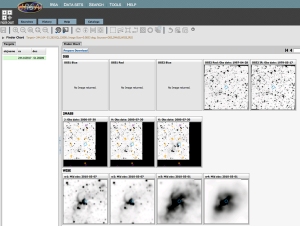 The return window in IRSA Finder Chart. It is displaying the same coordinates (which are typed in) for DSS, 2MASS, and WISE. In this case the IR source is a planetary nebula surrounding the target star.

Meanwhile, I have begun training the students who will go with me to Caltech at the end of July. I’ve been showing them the software and databases, explaining what we will be doing in more detail, and preparing them. We’ve taken a break because two of the three were gone on an expedition to India for three weeks but are now back safely. Once we get to Caltech, we’ll learn data reduction procedures, how to do photometry at different wavelengths for the target stars, and how to chart all of this as a Spectral Energy Distribution (SED) curve. Hopefully, something will come out of this analysis that we can draw conclusions from.

An Article for The Science Teacher:

Over a year ago I wrote and submitted an article to The Science Teacher, NSTA’s journal for high school teachers. It was finally accepted, and is now in print. But I’ll explain more about this in my next post.

So no rest for the weary, onward and upward, and no matter where you go, there you are.

I teach courses in multimedia, 3D animation, Earth science, physics, biology, 8th grade science, chemistry, astronomy, engineering design, STEAM, and computer science in Utah. I've won numerous awards as an educator and am a frequent presenter at state and national educator conferences. I am part of the Teachers for Global Classrooms program through the U.S. Department of State and traveled to Indonesia in the summer of 2017 as an education ambassador. I learned of the Indonesian education system and taught classes in astronomy and chemistry at a high school near Banjarmasin in southern Borneo. I am passionate about STEAM education (Science, Technology, Engineering, Arts, and Mathematics); science history; photography; graphic design; 3D animation; and video production. This Spaced-Out Classroom blog is for sharing lessons and activities my students have done in astronomy. The Elements Unearthed project (http://elementsunearthed.com) will combine my interests to document the discovery, history, sources, uses, mining, refining, and hazards of the chemical elements.
View all posts by davidvblack →
This entry was posted in Uncategorized and tagged afa teacher of the year, air force association, astronomy education, astronomy research, byu ret, hungry giants, nitarp, nsta, red giant stars, research experiences for teachers, ret program, the science teacher. Bookmark the permalink.