A panoramic photo of the Santa Monica Pier on August 2, 2014.

For our final day at Caltech for the NASA/IPAC Teacher Archive Research Program (NITARP) we drew conclusions from our research and evaluated how much we’ve learned from the process.

Part of the campus at Caltech.

Our main goal, besides learning how to use the IPAC infrared astronomy database, has been to research K-giant stars that may be consuming their own planets. When a main sequence star starts fusing helium in its core and expands outward, its inner planets may be ingested. Our own sun will go through this process in about five billion years, and it will expand outward almost to the orbit of Mars. Earth will be destroyed in the process.

A sundial at Caltech campus.

Our question has been, is there a way to determine if a star is going through this process? What evidence would there be in the star’s light, which is the only thing we can measure? Some of these young K-giants show anomalies, such as high levels of lithium and faster than expected rotation (stars should slow down as they expand). One explanation for this is that the lithium and increased angular momentum could be provided to the star from a planet as it is absorbed. So what evidence would be left behind that we could see? Perhaps the planet would leave behind a shroud of dust or gas that would become a shell or ring around the star. Such a star would show an excess amount of infrared radiation compared with a normal star, because dust and gas emit in the infrared bands (and the WISE mission’s 12 and 22 micron detectors are designed specifically to measure gas and dust). So, to make a long abstract shorter, we are looking at K-giants that are already known for high lithium abundances and fast rotation to see if they also have an infrared excess.

How to use the sundial at Caltech.

We found five stars from this preliminary database (derived from previous studies by de la Reza et. al, Jolene Carlberg, etc.) that meet all three criteria. I reported on these results and how we got them in my last post. So what can we conclude from these results? First, we hoped to find more than this. However, it isn’t necessarily a negative result – it could well be that a planet breaking up would leave a shroud or ring for only a very short time period before it dissipated or clumped back together. So finding five stars out of 180+ on our list that have this feature is actually pretty good. Perhaps our parameters have been too strict – maybe we should look at chi values less than 2.5 (2.5 standard deviations puts 95% of data below that threshold, so being above that level is considered “significant” in most scientific circles). At what point do we consider infrared readings to be in “excess” of normal? How much is too much for it to be a star at all?

A post office at Caltech. Notice the commemorative stamps honoring some of the Nobel Prize winning scientists that have taught here. I have interviews a man (Reed Nixon) who went to school here when Robert Milliken was President and took chemistry from Linus Pauling. The Von Karman Auditorium and Museum at JPL is named after Theodore von Karman.

We discussed all of these issues during this last session of our workshop. Dr. Rebull stayed away from this session on purpose, to make sure our conclusions were our own. As teachers, we had planned on ways to evaluate the students’ learning. I had proposed creating a pre-post test instrument, but due to concerns about privacy and school policies on research involving students, we decided instead to have the students show what they learned by dividing them into cross-school groups and drawing concept webs, then explaining and expanding them to the others. We will do the same in two months to see how many of the concepts they retain.

A concept web developed by students on our last day at Caltech for NITARP.

The concept webs I’m displaying here show a rich interconnectedness of ideas and concepts. One of the ideas we discussed was the standard emission curve a blackbody object would radiate. Stars approximate this curve, which is what Wien’s Law is all about. Our project compared our target stars to this blackbody curve. To help the students understand this concept, I had made a joke about my body being a Black body (that is my name, after all). For some reason, all the groups remembered that particularly horrible pun and linked my name to “blackbody.” 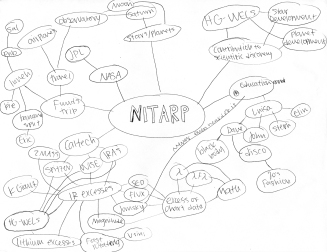 Another concept web done by students during our workshop at Caltech. Notice the link from “blackbody” to my name. That’s what I get for telling bad jokes.

During the afternoon as we were winding down, I walked over to the gift store at Caltech and took a few more photos of the campus. I bought two Curiosity rover Matchbox cars and a knit Caltech cap. We wrapped up in the early afternoon and ate supper in Old Town Pasadena again. We said our goodbyes for now, knowing we would be communicating back and forth all fall as we prepared the abstracts and posters, and that we would see each other again at AAS in Seattle in January.

The other teachers had flights in the early morning on Saturday (a few of the students were staying over with family or flying out Friday night), but I had deliberately set our flight in the afternoon so we could go to the beach in the morning. We packed our things in the rental SUV and drove out to Santa Monica Pier, finding parking for $10 on the beach itself. It was early enough that the traffic wasn’t too bad and there was still room in the parking lot, even for a Saturday morning in August. The weather was nice and the water cool. I didn’t put on my swimsuit, but the students did and had a good time.

We met up after two hours and changed back. By this time the beach was beginning to get crowded and we were getting sunburned, so it was time to go. We drove down the Harbor Freeway toward the airport and exited to find a gas station so we could fill up the tank before dropping off the SUV at Hertz. The station we found was right across the street from Randy’s Donuts, an icon in the LA area. I’ve seen photos before, but never had been here, so we all went over and bought donuts. They were amazing!

Santa Monica beach as seen from the pier. The usual summer haze fades away the Malibu Hills.

We dropped off the SUV and shuttled to the airport, then worked through security to the terminal. While waiting for our flight, we all got cell phone notices that the flight was delayed two hours, so we had to hang around longer. I got some money out of the ATM so we could all get lunch. One of my responsibilities has been to keep all the receipts for reimbursement. NITARP pays for two students and one teacher, but we had three students. We were given a per diem for meals, and I was able to stretch three per diems to feed four people.

David Black on Santa Monica Pier looking back at the beach; August 2, 2014.

We reconciled all accounts and I got all the receipts from the students for their meals. Then the airplane was finally ready, so we boarded and flew out over the ocean, then turned and headed back to Utah. My wife met us at the airport and we drove the students back to Walden School, where they were met by their parents. So ends the first phase of our NITARP experience.

I teach courses in multimedia, 3D animation, Earth science, physics, biology, 8th grade science, chemistry, astronomy, engineering design, STEAM, and computer science in Utah. I've won numerous awards as an educator and am a frequent presenter at state and national educator conferences. I am part of the Teachers for Global Classrooms program through the U.S. Department of State and traveled to Indonesia in the summer of 2017 as an education ambassador. I learned of the Indonesian education system and taught classes in astronomy and chemistry at a high school near Banjarmasin in southern Borneo. I am passionate about STEAM education (Science, Technology, Engineering, Arts, and Mathematics); science history; photography; graphic design; 3D animation; and video production. This Spaced-Out Classroom blog is for sharing lessons and activities my students have done in astronomy. The Elements Unearthed project (http://elementsunearthed.com) will combine my interests to document the discovery, history, sources, uses, mining, refining, and hazards of the chemical elements.
View all posts by davidvblack →
This entry was posted in Uncategorized and tagged caltech, concept web, drawing conclusions, infrared astronomy, ipac, k-giant stars, nitarp, randy's donuts, santa monica beach, santa monica pier, scientific method. Bookmark the permalink.