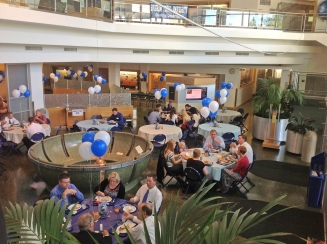 Graduation luncheon at the Eyring Science Center at Brigham Young University in August, 2014 for the College of Physical Sciences.

Upon completion of my trip to Caltech with my NITARP students, I resumed my studies at Brigham Young University for the remaining two weeks of my Research Experiences for Teachers (RET) program. 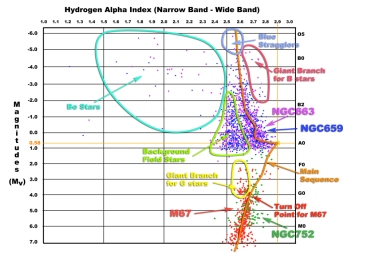 Before the Caltech trip, as documented previously, I had charted four open clusters of various ages using a hydrogen alpha index. This color-magnitude diagram (CMD), once calibrated for distance, showed some interesting results. I was able to pick out the expected number of Be (B emission) stars in the younger clusters, see a well-defined turn-off point for three of the four clusters including blue stragglers, pick out the background field stars from the cluster stars, etc. It was the culmination of seven weeks of work involving learning how to use and chart data from IRAF, DAOPHOT, and DS9 software.

But my goals for this research were far from over. Now that I was back at BYU, I wanted to focus on learning other astronomy software such as AstroImageJ for doing other types of tasks. I wanted to learn how to chart the variability of stars, create Spectral Energy Distributions (SEDs), etc. I started with the SED because I had just learned how to do these at Caltech. I choose my old friend V*V831 Cas as a target star because I had good data for it over many nights from the BYU West Mountain 36 inch telescope. 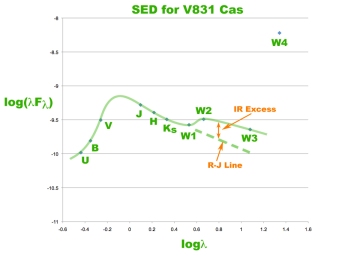 Spectral Energy Distribution (SED) for V*V831 Cas. The peak is somewhere in the yellow-orange part of the spectrum (V stands for “Visible” or green, not violet). The hump in the WISE data probably indicates a ring or disk or dust surrounding this HMXB star. I don’t know what’s going on with the W4 reading – I might have a bad calculation or other anomaly there.

It was easy enough to look up the star’s magnitude information at the infrared wavelengths using 2MASS and WISE data, since I knew how to find it and feed it into the same spreadsheets I’d used last week. But I wanted a larger Wien curve, including the U, B, and V filters. This was a Be star, and I expected its flux densities to peak in the B or V part of the spectrum, so I needed those magnitudes as well. I looked them up in the SINBAD database, but had to find their zero points (compared to an A0 star) in order to convert them into flux densities. This took some research, and I’m still not sure I got the right values, but it did make a nice enough curve. It did not peak where expected, however. It peaked somewhere in the yellow-orange part of the spectrum.

According to the curve, V*V831 Cas also has a hump-shaped infrared excess between WISE 1 (3.4 microns) and WISE 2 (4.6 microns), which could indicate a ring of dust surrounding this star. As it is a High-Mass X-Ray Binary (HMXB) star, I would expect a ring or accretion disk of dust and gas as material is pulled off the B star onto the black hole or neutron star in this binary system. 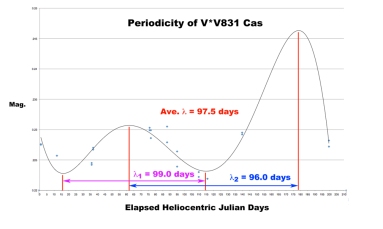 Light curve for V*V831 Cas, To fit the data, Excel had to use a fifth order polynomial with a large difference in amplitudes. The average period is about 97.5 days.

Next, I read through the instructions for using AstroImageJ and used it to create a chart of V*V831 Cas’ variability. To do this, you read in the .fits files from each night of NGC 663 that I had data for. You then choose up to ten comparison stars (which should NOT be variable stars) around the target star on the first image, then run the images through making sure the comparison and target stars are all kept within the frame of the image, then track each star if there is movement from frame to frame. The comparison stars allow the software to adjust for differences in viewing from night to night. Once all the frames are entered, the results for the target star are placed in a spreadsheet with magnitude values versus Heliocentric Julian Dates. The data can be exported to an Excel spreadsheet, then charted into a curve such as the one shown here. For Excel to fit a curve to my data required a fifth-order polynomial. 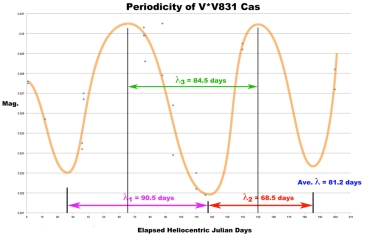 My own attempt to fit the data to a curve. This has a more regular amplitude but the period calculated (84.5 days) appears too short compared with the AAVSO data.

I looked up the star in the American Association of Variable Star Observers database. The website has a function that can generate light curves using available data for a star. I used one and plotted what appeared to be the maximum points and estimated the period of its variability at about 105 days. Looking at the Excel generated chart gave me a period of 97.5 days, so pretty close for the minimal data I have available (only about two and a half periods and some of it sketchy during poor viewing months). But one thing about the Excel curve still bothered me – it seems to have too extreme of an amplitude change. I attempted to plot my own curve using the same magnitude points and came up with a curve that had a more consistent amplitude, but a period of only 81.2 days, which isn’t very close at all to the AAVSO data. 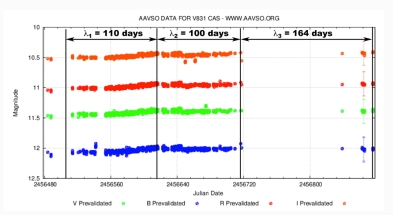 Light curve generated automatically from the American Association of Variable Star Observers’ website. This showed available data for the last year and indicates a period of about 105 days (ignoring the missing data on the right). This corresponds better with the Excel calculated period than my own estimate.

One thing is certain: I need more data to see if my calculated period agrees with further AAVSO data. I suppose that is always the case. One always needs more data. To draw any real conclusions, I would need to observe V*V831 Cas for several years in order to get several periods. We tend to think of most scientific studies as being founded in deep sets of consistent long-term data but it isn’t often that way. You have to make do with what data you can get, and hope you did a good enough job gathering the data, calibrating your instruments, and using solid statistical tests. If all that is true, you can at least draw some tentative conclusions and hope further evidence supports your analysis. 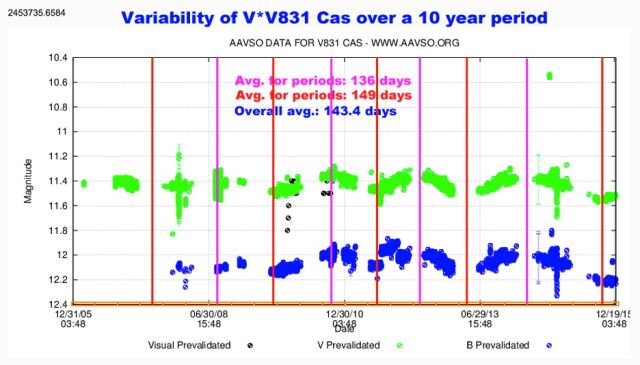 When I expand the AAVSO search to the last ten years, a more regular pattern emerges showing that V831 Cas has a period of about 143 days. However, my own calculations showing a 97.5 day variation might indicate there are patterns on top of patterns, which can occur in such a dynamic binary star system. Keep in mind that the black hole or neutron star and the visible Be star are orbiting each other in elliptical orbits while material is being pulled off the B star into an accretion disk around the black hole. The accretion disk itself has a period as do the co-orbiting stars.

During my final week at BYU, I had only three days to write up my final presentation and present it to the REU students and physics professors. They only provided 20 minutes per presentation, so I couldn’t say much and focused on my new work since returning from Caltech, and what conclusions I could draw from my efforts. I still have much I want to do, but I feel I’ve accomplished a lot for one summer. I am attaching a PDF copy of my final presentation here:

Now I must turn my attention back to my own astronomy class at Walden School this fall and how to integrate what I have learned. I hope to create several lesson plans and activities that I can present at the American Astronomical Society conference in January as an educational poster, since I will be there already with NITARP. I will have my astronomy students try these lesson plans out and make modifications. Dr. Hintz provided me with an entire hard drive full of images taken with the 36-inch telescope on West Mountain that have not been analyzed. I hope my astronomy students can make use of the data for science fair projects. 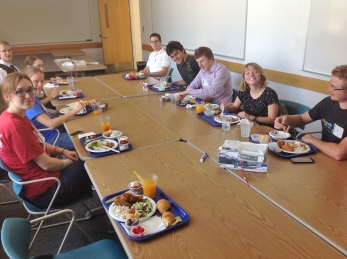 Some of the REU students at BYU during the summer of 2014. Olivia Mulherrin is the lady smiling on the right side. This was the banquet on the last day of our program.

On our final day, which was also the summer term graduation exercises for BYU, we attended a nice reception luncheon put on by the Physics department for graduates and their families. Now the other REUs go back to their own universities to share what they’ve learned. I go back to school. Our contract days begin next week, and I’ve already begun to organize my room.

Since one of the three RET teachers didn’t complete his program, the available grant money will be split between the two of us remaining. I will get $1600, which I hope to spend on a new telescope. Hopefully I can use it for astrophotography, although a decent motorized equatorial mount and a CCD camera will be much more than $1600. At the very least, I can get a good Dobsonian mounted reflector. I look forward to finally having my own telescope.

I teach courses in multimedia, 3D animation, Earth science, physics, biology, 8th grade science, chemistry, astronomy, engineering design, STEAM, and computer science in Utah. I've won numerous awards as an educator and am a frequent presenter at state and national educator conferences. I am part of the Teachers for Global Classrooms program through the U.S. Department of State and traveled to Indonesia in the summer of 2017 as an education ambassador. I learned of the Indonesian education system and taught classes in astronomy and chemistry at a high school near Banjarmasin in southern Borneo. I am passionate about STEAM education (Science, Technology, Engineering, Arts, and Mathematics); science history; photography; graphic design; 3D animation; and video production. This Spaced-Out Classroom blog is for sharing lessons and activities my students have done in astronomy. The Elements Unearthed project (http://elementsunearthed.com) will combine my interests to document the discovery, history, sources, uses, mining, refining, and hazards of the chemical elements.
View all posts by davidvblack →
This entry was posted in Uncategorized and tagged aavso, american association of variable star observers, astroimagej, astrophysics, be star, Brigham Young University, cmd, color magnitude diagram, flux density, high mass x-ray binary, hmxb, hydrogen alpha index, research experiences for teachers, sed, spectral energy distribution, v831 cas, variable stars, wise data. Bookmark the permalink.