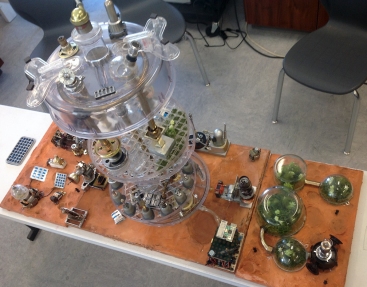 A view of Arrakeen Colony, a model we made of a possible city on Mars.

During our fall 2016 semester at American Academy of Innovation, we selected Mars Exploration as the theme of our first school-wide project. To prepare my classes and get students excited, I involved them in creating several projects related to Mars. 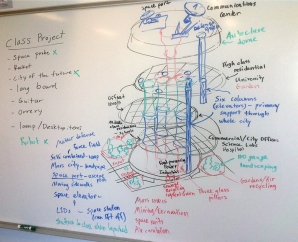 Initial sketch for our Mars colony sculpture. We designed it based on an old autoclave that was donated to my school, supported by metal pipes and glass beams (made from microscope slide disinfecting bottles). The first level is for manufacturing, the second is residential housing, the third is administration offices and commercial buildings, the fourth is for the university, mayor’s mansion, and a park. The upper dome houses landing pads, a communication dish, etc.

I teach a unique course that I call STEAM it Up, where students create projects that integrate science, technology, engineering, arts, and math. I’ve reported on these projects in my other blog site (http://elementsunearthed.com), and they include designing inquiry chemistry experiments to study the variables of dyeing cloth, making marbled paper to study fractal math patterns, and building steampunk costumes. To bring in the Mars theme, we decided to build a sculpture of a possible Mars colony out of junk and repurposed items. 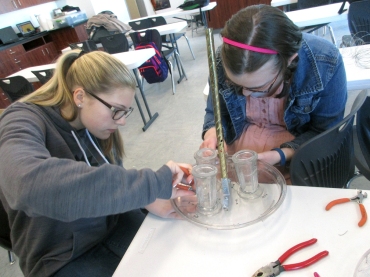 My STEAM it Up students constructing the base of the city.

A few years ago, someone donated pieces of medical equipment to my previous school that came from some doctor’s office. I wasn’t there when the donation came in, or I would have turned much of it down as we had no use for many of the items. After all, what was I going to do with a broken down avocado green 1970s vintage water still? But some of the items were interesting from a junk sculpture point of view, including a plastic autoclave with four levels used for sterilizing surgical equipment. I thought at the time that it looked like a futuristic city. We decided to start with that as the basis of our colony – a multilevel domed city on Mars. The plastic grids of the autoclave would be the floors or levels of the city, held up by central columns made from microscope slide disinfecting bottles (old style, made from glass) that were also donated. We sketched it out on my whiteboard and decided what the different levels would be for.

The four main levels after construction. The levels were offset to allow more light to penetrate through the levels. On Mars, each level would be enclosed in a clear dome.

My first semester STEAM it Up students began construction and put together the main levels and built some smaller pieces of equipment out of my extensive collection of old motor and electronics parts. These would be factories and manufacturing plants for the colony. A student used old Macintosh charging cord adapters that had fallen apart (they tend to do this) and strips of ruffled foil from a princess party tiara to make Mars rovers. A student created the upper dome from the autoclave lid, adding landing pads for shuttles, an observatory, a defensive laser turret, and a communications dish. Another student built a base for the city. As first semester ended, I added some single family housing units on the second level made from Trulicity injection caps and the rubber feet that were taken off of my lab stools. I created the final pillars for the fourth floor and attached the dome to the top. 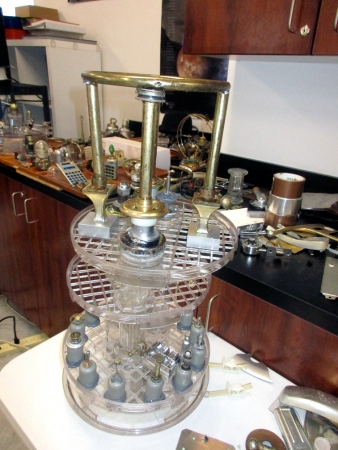 During winter break, I added residential housing units to the second level and created pillars to support the upper dome.

Now you might wonder what this has to do with STEM (the art part is obvious). This was really an exercise in engineering and materials science. The students had to work out how to attach all of these different materials from many sources together so that they wouldn’t fall apart, have strength in the load bearing members, and be aesthetically pleasing and symmetrical so that it wouldn’t tip over. We wanted it to look like a deliberate piece of graceful engineering and architecture – seemingly delicate but actually sturdy and stable. And we had to figure out how to fit it all together with rods, brackets, bolts, wire, and glue. We tried several types of adhesives and finally selected E-6000, which takes about 20 minutes to set up but dries clear and hard and attaches many types of materials together. Time will tell if it holds up to UV light or turns yellow like some adhesives that I’ve tried.

Baseboards with paper maché added. The large based used traditional newspaper strips soaked in flour-water paste, the other two used commercial paper pulp. We designed it to look like a realistic site on Mars with craters that have been partially removed for construction.

As the first semester ended, I proposed several names for our colony based on ancient words for “Mars” and “city.” These included:

Many of the river channels on Mars bear these names, such as Shalbatana Vallis and Mawrth Vallis. The students liked several of these, but one student proposed that we name it Arrakeen after the capital city in Frank Herbert’s desert world Arrakis from the classic science fiction novel Dune. This is the name we chose. Our city is now Arrakeen Colony.

The completed baseboards, painted to look like the surface of Mars.

When second semester came, my new group of STEAM it Up students continued to work on the model. They built more equipment, ranging from construction sites to bulldozers, steamrollers, communication equipment, air processing plants, hospitals, etc. Many of the parts move or spin, such as the rotating communications center or the construction crane arm. They built several ground-to-orbit shuttles and cargo carriers, factories, and other parts. We found a 3D model of an astronaut online and printed out a bunch of them as small as we could manage (although they are still about twice as big as our city scale would dictate). Several students brought in HO scale plant materials – plastic grass, trees, bushes, etc – and used Pyrex jars, glass bottles, and plastic domes to build a series of greenhouses. They’ve also started to glue plastic strips under the top level in order to add trees for a park and fountain. 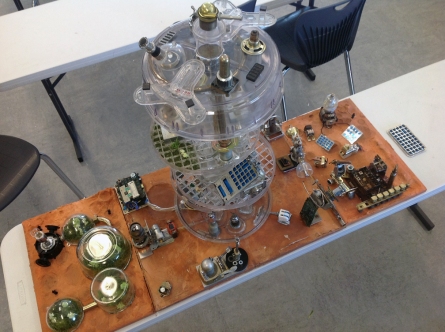 The biggest job was preparing the bases for all this. I purchased some paper maché fiber at a craft store and we used it to build up Mars terrains on two baseboards. We used traditional paper maché made from strips of torn newspaper soaked in a flour-water solution to build up a terrain on the larger base for the city. These took several days to dry. We then used orange, brown, and tan tempura to paint the bases to look like Mars soil. The end result was quite good, although the traditional newspaper strips cracked in places.

Construction site on Mars. The large building under construction (left) is for manufacturing solar panels, a critical limiting factor for expanding the colony. Notice the construction crane with moving arm. A bulldozer is pushing up dirt into a ridge, with a steamroller flattening the dirt behind. At the lower right, a nuclear power plant and charging station is used to recharge the equipment batteries, aided by two small solar panels. A fork lift is parked nearby awaiting recharge. Astronauts in spacesuits are working at the site. Nearer the city stands the main communication link with Earth and a rotation communication and radar installation. Two small rovers are attached by access tubes to the city.

With the bases complete, we glued the factories, greenhouses, astronauts, and equipment in place and mounted the entire city onto the large base. The end result is better than I had envisioned. There is a great deal of interesting detail, and the total effect looks quite good.

Greenhouses and Air Circulation Center: On the other side of the city from the construction site stand a series of greenhouses to recirculate air and add oxygen. Most oxygen is produced by cracking atmospheric carbon dioxide in the processing plant next to the main greenhouse. Initial power for the city is supplied by the nuclear power plant in the upper left. At lower left is the heating plant and main circulation pumping station for the greenhouses.

There are still things to complete over the final few weeks of the semester. We need to finish the park on the top level and add the mayor’s mansion and the university. The third level has a hospital but we still need to create administrative offices, a school, and other buildings. The second level has ten housing units and pumping facilities but needs more. The bottom level needs a few more small manufacturing plants. And we need to add greenery and plants wherever we don’t have buildings, as a Mars colony would need as many plants as possible. We got some glue on the outside of the dome the other day and tried to clean it off with acetone, but that only started dissolving the dome’s plastic. We’ve covered that up with a solar panel made from a metal grid and some sparkly blue paper cut from an old folder I had. We have several such solar panels elsewhere in the model. Lastly, when all is in place, we’ll need to touch up the paint in places and add smaller details.

Upper dome with landing pads. The shuttle models are attached with magnetic buttons. Notice the communications dish, the defensive laser turret, and the observatory dome and telescope.

I’m working on a virtual 3D model of the city with a moderate amount of detail in Daz3D Bryce, using pieces created in Blender and Carrara. Below left is a rendering of what it looks like so far.

A 3D version of the city, partially complete. The levels would be enclosed in domes to protect the atmosphere inside.

In four weeks we’ll hold our STEAM Showcase at AAI. I want to put the finished colony on display, along with posters describing its construction and what all the parts are for. In the process of building this and imagining what a colony on Mars would really need, the students have learned a great deal about how our future might actually happen; how we may someday plan and build a city on Mars.

I teach courses in multimedia, 3D animation, Earth science, physics, biology, 8th grade science, chemistry, astronomy, engineering design, STEAM, and computer science in Utah. I've won numerous awards as an educator and am a frequent presenter at state and national educator conferences. I am part of the Teachers for Global Classrooms program through the U.S. Department of State and traveled to Indonesia in the summer of 2017 as an education ambassador. I learned of the Indonesian education system and taught classes in astronomy and chemistry at a high school near Banjarmasin in southern Borneo. I am passionate about STEAM education (Science, Technology, Engineering, Arts, and Mathematics); science history; photography; graphic design; 3D animation; and video production. This Spaced-Out Classroom blog is for sharing lessons and activities my students have done in astronomy. The Elements Unearthed project (http://elementsunearthed.com) will combine my interests to document the discovery, history, sources, uses, mining, refining, and hazards of the chemical elements.
View all posts by davidvblack →
This entry was posted in Uncategorized and tagged american academy of innovation, arrakeen, engineering through art, junk sculpture, living on mars, mars colony, mars exploration, materials science education, modeling in science, names for mars, project based learning, steam education, steam projects, stem education, visualizing the future. Bookmark the permalink.